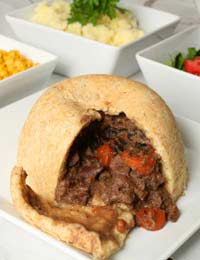 Be honest. Cold, dark, winter days are made for comfort food. Who doesn’t crave heavier, more glutinous grub at this time of year?

I don’t know if part of the comfort provided by this type of food comes from the fact that it takes time to cook-bubbling away and warming up the kitchen until the windows are streaming with condensation-or if it’s the satisfaction of creating something glorious in defiance of the miserable weather!

‘Rib-stickers’ as my dad calls them are classic winter dishes that fill the whole house with tantalising smells of optimism and purpose! Who cares if it’s raining again? Our instinct to eat for energy and warmth remains strong; shame we don’t work it off as well as we used to.

Don’t believe the doubters who say this is too difficult or time-consuming. You can do it and you will be chuffed to bits with the result!

There’s a lovely extract from ‘Martin Chuzzlewit’ by Charles Dickens where the sister, Ruth Pinch, attempts to make her first beefsteak pudding for her brother, Tom, that sums up the feelings of a first-time pudding maker.

“...if it should happen not to be a pudding exactly, but should turn out a stew, or a soup, or something of that sort, you’ll not be too vexed, Tom, will you?”

Tom replies: “It gives us a new, and quite an uncommon interest in the dinner. We put into a lottery for a beef steak pudding, and it is impossible to say what we may get. We may make some wonderful discovery, perhaps, and produce such a dish as was never known before.”Take some deep breaths and commit to the creation of a pudding!

Mix all the ingredients-add the water tablespoon at a time-until you have made dough that is easy to handle (neither sticky nor dry and lumpy). Leave this to rest in a cool place while you prepare the filling.

Ingredients for the Filling:

Cut the stewing steak into cubes of about 3cm; remove any stringy-looking bits.Place the flour on a plate with a generous sprinkling of sea salt and a few good shakes of black pepper.Now pop the meat cubes into the flour to cover them.Peel and roughly chop the onions.

Melt the dripping in a large, heavy-based pan (skillet) over moderate heat and fry the onions until soft and translucent.Add the floured, cubed steak and brown the meat all over.

If your pan is big enough, add the beef stock or water and stock cube or transfer to a larger saucepan.Bring the liquid to the boil then simmer for about one and a half hours. Stir occasionally. (If there is a braise/simmer option on your microwave follow the guidelines to save electricity and time.)

Squirt a generous blob of tomato puree into the mixture towards the end of simmering time.

Back to the Suet Pastry-Remove from cool place and turn out onto a lightly floured surface. Roll out about two thirds of the dough into a large circle. Next, fold the dough in half, then again, to form a triangle. The pointed end sits nicely in the bottom of your greased pudding basin as you open out the dough to line the basin.

Fill the dough lining with the meat mixture. (Keep some of the rich gravy in the pan to serve separately.) Roll out the remaining dough to make a lid; cover the basin ‘open end’ with the dough and cut to fit exactly. Slosh a little milk on the edges to seal them.Cover with greased greaseproof paper or foil secured with string beneath the rim-make a fold of about 7.5cm down the centre of the paper first to allow for expansion.

Boil in a large pan or steamer for about two and a half to three hours. (If you don’t pre-cook the meat it needs about 4 hours.)

Try using 450g bacon instead of steak with onion and parsley.
Diced chicken with leeks and carrots makes a good alternative.
Chunks of root vegetables can replace the meat altogether and vegetarian suet used instead.
There’s no going back once you’ve made that first pudding because you won’t want to!
Happy cold days...

How to Cook a Simple Romantic Dinner