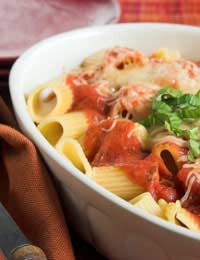 Pasta bakes are ideal meals for busy families, they are simple to prepare, tasty and because they are cooked in a single dish, easy to wash up afterwards.

This delicious bake serves four as a dinner or six as a lunch.

Put 4 tablespoons of oil in a large roasting dish and pour in the onion, aubergine, pepper and courgettes. Season well, stir to cover with oil and bake for thirty minutes, shaking half-way through the cooking time.

Pour the crushed garlic, tomatoes and dried herbs into the dish, stirring well to combine with the vegetables then return to the oven while you cook the pasta for two minutes less than the stated cooking time and drain it, keeping several spoonfuls of water to mix with the pasta into the vegetables.

Bake together for a further ten minutes or until the pasta is cooked through. Stir in the basil, sprinkle with a little brown sugar to bring out the flavour of the tomatoes and serve. This is good with some crusty bread or a salad that contains olives and lemon juice to add to the Mediterranean richness of the pasta bake’s flavours.

Non-vegans may like to sprinkle the top of the bake with some grated cheese and grill for a minute to give a savoury crusty topping to the bake.

Most meaty pasta bakes use beef, but this pasta bake is fully of the rich flavours of bacon along with a healthy dose of vegetables to make it an ideally balanced one pot meal. Serves four.

Using a large pan of salted water, cook the pasta until al dente then drain and set aside

Grill the bacon chops for 3 minutes on each side and cut into dice, or lightly grill the sliced bacon until cooked but still soft, cut into smaller slices, about fork sized.

In a large bowl or jug, mixed the tinned tomatoes with the hot sauce and oregano and some grated black pepper, then layer in a greased ovenproof dish with the pasta bacon and frozen peas. Mix breadcrumbs and cheese and sprinkle over the top.

Bake for twenty-five minutes until topping is golden brown. Because bacon is naturally salty, you shouldn’t need extra salt in this recipe. Serve with salad.