Home > Stocks & Sauces > Roux-Based Sauces: What, How and When

Roux-Based Sauces: What, How and When 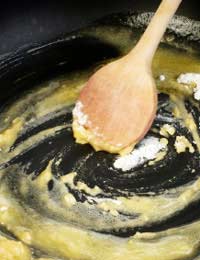 Pronounced roo, a roux is the usual term given to the method of mixing equal amounts of fat and flour that are cooked and combined with liquid to make a base for sauces. Milk is the most commonly used liquid for a roux-based sauce, but a good stock on its own, or a combination of milk and stock, water, wine or fruit juices can also be used. The liquid that is added varies according to the purpose of the sauce, which is more often than not savoury-and can be served as an accompaniment to vegetables, fish, poultry or meat. The sauce may also be an integral part of pasta dishes (like macaroni cheese.)

Sauces are not difficult to make; yet a good sauce can enhance the flavour of food and transform the simplest dish into something quite sumptuous. Careful regulation of the heat and using the right amount of flour to liquid while blending is crucial to the success of your sauce, which is why the phone usually rings while you’re making it. Try to get this part done without any distractions!

Melt the butter in a heavy-based saucepan over low heat then add the flour and cook these ingredients gently for 2-3 minutes, stirring with a wooden spoon the whole time. Remove the pan from the heat and add some of the milk; slowly. Keep stirring to avoid lumps forming. (If you stir the mixture in a figure of eight pattern, and make sure that you touch the bottom and sides of the pan on each figure eight, the sauce is less likely to stick and get lumpy.)

Return the pan to a slightly higher heat then continue to add more milk, stirring the whole time as the sauce begins to bubble slightly and thicken. (You will see the change in texture and be able to feel it as the spoon gets a little ‘heavier’ in your hand.) Add little and often; blend to a smooth sauce as you go along and keep repeating this process until all the milk has been used. If the sauce is lumpy, whisk thoroughly with a hand-held balloon whisk to break down the lumps until the result is as smooth as possible. The sauce should pour without being runny.

A basic brown roux is made in a similar way but hot stock or vegetable water is used instead of milk. This creates a darker coloured roux. To save on preparation time, it’s a good idea to make more brown roux than is needed straight away and keep some in the fridge for a week or two. When you want to make another sauce, simply start at the part of the recipe where the main ingredient, the liquid, is added to the brown roux.

White roux is most often used as a base for sauces like cheese, onion, bread, parsley and other white sauces that go especially well with fish and chicken. A brown roux is used in gravy, Espagnole, which is the basis of many compound sauces such as demi-glace, red wine, Robert and devilled sauce.

How to Make Chutney

How to Make Jam

Types, Methods and Consistencies of Sauces

Easy Steps to Egg-Based Sauces.
Share Your Story, Join the Discussion or Seek Advice..
really useful website for any food tech detention
bradders - 5-May-16 @ 3:10 PM
Pardon my previous question . . .the answer was on the same web page - Easy steps to egg-based sauces! Thanks
Christo - 18-Jan-12 @ 11:14 AM
Pardon the confusion created by my surname of "Roux" it always raises comments when I get involved in cookery discussions! How does one add egg to a basic Roux? I am told that it makes a sauce richer, tastier and more silky in texture and tase.If this is so why is egg not a standard ingredient of a roux based sauce? Thanks
Christo - 18-Jan-12 @ 11:08 AM
Title:
(never shown)
Firstname:
(never shown)
Surname:
(never shown)
Email:
(never shown)
Nickname:
(shown)
Comment:
Validate: