Home > Casseroles and Stews > Pork: One Pot Meals from Around the World 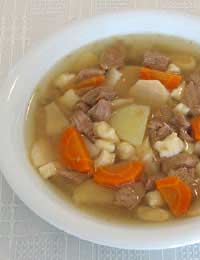 Pork is an ideal meat to cook as a one pot meal as it has a subtle flavour that is enhanced by long slow cooking.

Goulash is the traditional stew of Hungary and its origins have been traced right back to the 9th century, when Magyar shepherds (called gulya) made this stew while out with their flocks. Best served with crusty bread, as the shepherds would have done, to mop up the savoury sauce. Serves four.

Trim any excess fat from the pork steaks before cutting into cubes and putting in a plastic bag with the paprika and a little salt and pepper. Tie the top of the bag and shake well to coat the meat evenly with the seasoning.

Now heat a large frying pan over a medium heat with the olive oil and pour in the pork mixture, cooking for three or four minutes before adding the tin of chopped tomatoes with the herbs.

Preheat the oven to 180 °C or gas mark 4 while you bring the pan to a simmer, stir in the potatoes with around 100 ml of water. Reduce the heat very slightly and simmer for five minutes.

Transfer to a covered casserole dish and cook for two hours at a medium heat until the pork and potatoes are tender. Stir in the fresh parsley and the yogurt, reserving a single teaspoonful for the top of each of the four portions.

A potjie is an African cooking utensil - a three-legged cast iron pot that stands in the coals of an open fire. It’s also any dish cooked in a potjie, so this recipe adapts the long slow cooking method to bring out the maximum flavour of pork.

To ensure you get the best from the ingredients, ensure the casserole cooks slowly and don’t boil it, or even stir it, because this causes the meat to break up and look less attractive. It’s best if you don’t even open the lid, although you can check the dish half way through cooking time, to ensure the ingredients are not drying out. The moisture contained in the ingredients should be sufficient to keep the dish moist until it is cooked. This dish serves eight.

Preheat the oven to 180 °C or gas mark 4. In a frying pan, heat the butter and oil and brown the pork on all sides before adding the onion and garlic and cooking until soft.

Transfer to a large, lightly-oiled casserole dish, and add the vegetables in layers, starting with the potatoes, then the carrots, then beans and finally the mushrooms.

Blend the curry paste into the tomato puree mixture and pour it over the layered dish. Cook in a slow over for between two and three hours and pour in a portion of cream to each dish just before serving.

How to Make and Serve Dumplings