Home > Cupboard Ingredients > What You Need to Know About Flour 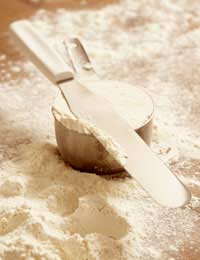 Flour comes in two basic categories – wheat-based and non-wheat based, and within those two categories there is a sometimes bewildering range of options. Here’s a handy guide to help you decide which flour to use.

There are three basic types of flour produced from wheat:

These flours then come in a variety of formulas used in different kinds of cooking:

Flours which are not derived from wheat may or may not contain gluten. Gluten allergies are becoming more commonplace and using non-wheat flours allows the gluten intolerant to enjoy baked goods. Some flours also work better for specific dishes than wheat.

White flour can be kept in a cupboard or pantry for up to eight months in a sealed container.

Wholemeal flour keeps for only four months in a cupboard, not matter how tightly sealed, and for up to a year in a freezer if in a tightly-sealed plastic container. This is because the wheatgerm has a high oil content and it may become rancid if kept in a cupboard where temperatures are not low enough to stabilise the oils.

If you store flour near granular detergents, onions or other strongly-scented items it may pick up a taint. On the other hand, you can put a dried bay leaf in the box with the flour to prevent infections because bay leaves are highly insect repellent - the flour will not be scented by a dried leaf although it may by a fresh one.